Yes, I know it’s a dated meme that’s been driven in to the ground, and I’m ok with that. In fact, because this is a meme from ancient internet history, it makes it even more appropriate for this topic because this is something that should just not happen anymore, and yet it happens all the time.. So, here’s a post inspired by that all-too-true tweet from 20kGroup and Matthew Carberry, along with couple more things that still happen in social media that should have been wiped from existence ages ago. Don’t pick fights with your customers. Ever. Because you will lose more than you think. Yes, you’ll lose that customer, but you’ll also lose something much more important: RESPECT. Nobody wants to do business with someone who’s confrontational and too proud for their own good. Your brand can’t win here so take it offline, solve the problem, and move on. Why does this still happen? Auto DM’s are the least-social way to say anything in social media. Proponents of Auto-DM’s say it’s simply the easiest way to show appreciation for a new follower. Well,  I’m sure your followers are truly grateful that you’ve put forth the absolute bare minimum of effort to thank them. If you really appreciate new followers, then take the time to thank them personally. And in the name of all that is good in this world, don’t tell me to follow you on Facebook too. I’ve got news for you: If I see someone swearing a blue streak in the parking lot of a store, you better believe that it will change my opinion of that store if they walk in and stand behind the counter for their shift. Same thing applies in social media. On or off the clock, on your own account or on theirs, you are intertwined with your employers brand, not because your boss says so, but because the CUSTOMERS say so.

I love old-school propaganda posters. Like the kind from WW1 and WW2. They’re magnificent. They perfectly illustrate how powerful messages were conveyed in a bygone era of innocence, confusion, anger, fear, and unequaled bravery.

There was no gray area in the propaganda from that time period. You knew at first glance what the message was, and you knew that they were dead serious about it. ‘Buy War Bonds’, ‘We Can Do It!’, ‘Loose Lips Sink Ships’, are some of the classics that everyone has seen as shining examples. 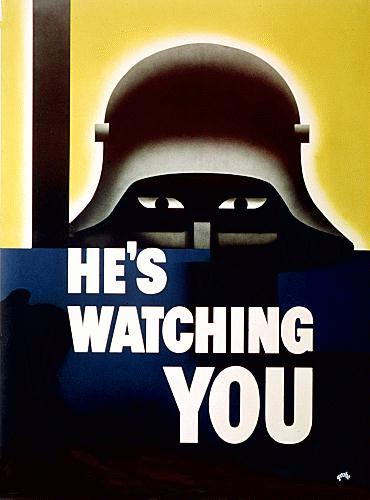 They played on basic human instincts and powerful emotions: Fear, Pride, Anger, Love, Hate. And they did this exceptionally well. Big bold images of happy smiling families collecting scrap iron on the home front, horrifying demonized images of the ‘enemy’ as blood-sucking creatures hovering over terrified children, powerful and proud Allied soldiers charging ahead to victory.

At the time, the world was a pretty big place. Other countries seemed like strange, distant lands filled with odd customs and a totally different way of life. It was relatively easy for people to make the attitude shift that propaganda was demanding of them, since the topics contained within them were so far away. Most people didn’t have close ties to the ‘enemy’. There was little understanding about foreign purposes or policies by the average person, and the information they did get was filtered and edited by the news organizations and by government bureaus.

But what about now? I’m going to throw in the oft-repeated phrase “Times have changed!”. Media has transformed in to a completely different animal since the advent of the Internet, world travel has become easily accessible to all and is commonplace, we are all connected 24/7 and communicate instantly to all corners of the globe. How does propaganda work now? Or does it even have a place?

Some might say that propaganda is extinct. That once the Internet makes its way in to the infrastructure of a country, the influence begins to shift from the powers that be back to the people. Information is power, and when everyone in the world has access to the same information as everyone else, the playing field all of a sudden becomes much more level. Certain governments are trying, and failing, to contain this change, but we all know that eventually there will be no stopping it. Just like radio and TV spread all over the world, so too will Internet and Social Media.

Could it be that Social Media is turning in to the propaganda of the next generation? Except instead of being controlled by government or military, it’s controlled by individuals. Individuals with reach, with influence, with charisma and with intelligence on how to persuade. It won’t be recognizable propaganda as we’ve known it up to this point, but there are indicators that it influences in much the same way. Look at how easily the Gap was persuaded to change its logo back after the ‘uprising’ that occurred? Companies change logos all the time, why should Gap be any exception? Well, there were a few key people who, through their postings/tweets/messages were able to persuade larger groups of otherwise indifferent people that the logo change was terrible. Their phrasing of tweets and message, their passion for the original logo became the propaganda tools that influenced those who may not have even cared about the change to speak up and become opponents.

Social Media has proven to be a highly successful method of influencing behaviour, and I think we can all agree that it is quickly become the default method for spreading a message. If it’s on Twitter, the world CAN see it. If it’s shared by the right people, the world WILL see it. Propaganda knows no borders now. Even though Malcolm Gladwell makes some good points about the ties made in social media being ‘loose ties’, sometimes those loose ties are all that is needed to bring about social change. If you reach enough people, with a simple and powerful message that resonates on a base level, it doesn’t really matter if your ties are weak or strong. The influence is there if you use it right. Just like how people bought millions of war bonds to ‘do their part’, many small actions can be incited through social media in order to enact a big change.

I guess Rosie was right, we CAN do it.

Here’s a fascinating visual representation on who dominates the web in terms of traffic:

What would be even more fascinating is if they had done retroactive versions of this, lets say going back every 5 years. It would be very telling to see the current social media powerhouses eclipsing the previous web champs by such large margins.

It also shows how the web has changed its emphasis from sites built by corporations to sites built by social communities. What will this chart look like in 5 years I wonder?